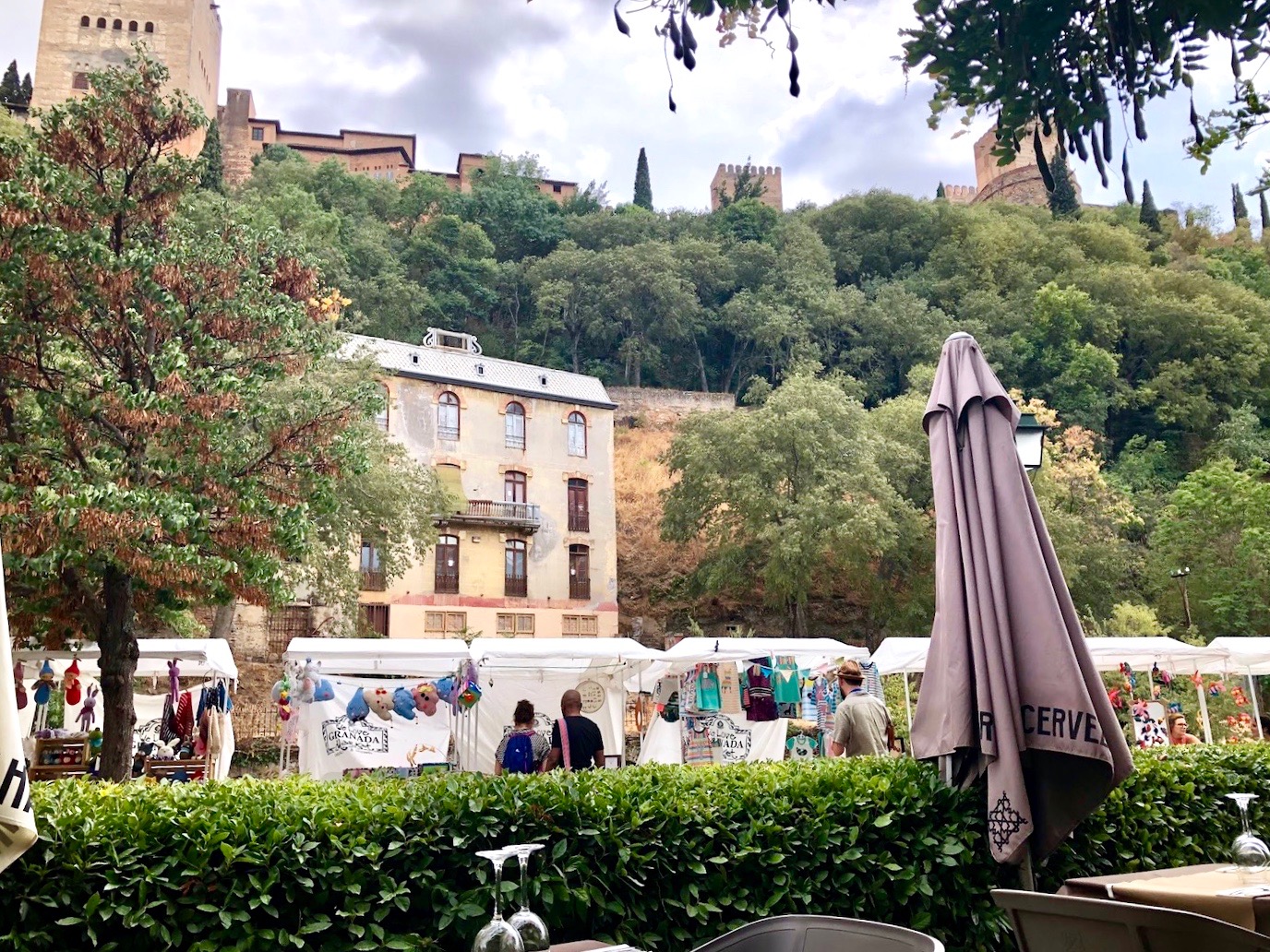 I’m back from Spain and what better way to celebrate Wine Wednesday than with an authentic Spanish food and wine pairing?

Unlike Madrid, it was a challenge to find a good selection of wine by the glass in Granada. Possibly, it’s a cost consideration or because many restaurants cater to tourists who even without knowing Spanish, were able to say, “Tinto, Ribera or Rioja.” (Note that Ribera del Duero is a mouthful, so saying Ribera is good enough.) While a glass is a bargain at about 3.50 Eu, you can get a glass of Granada wine for 2.50. Even the cheapest wine is good wine, but expect only simple and pleasant juice.

Luckily, if you want a better choice, buying a bottle of wine is very affordable and if you want good food, it’s best to stray from the tourist path. In the case of Granada, that means wandering the hilly streets, turning sharp corners and getting lost. I found the best way to find a good restaurant was not to look at the menu, but see which ones were inhabited by locals.

The lower end of El Albaicín (Albayzin in Arabic) is filled with tea houses and Moroccan restaurants. While I’m sure many are great, the streets are crowded with tourists and peddlers. Head up to Paseo de los Tristes where the street opens up to a stunning view of the Alhambra. On Saturday, there is an artisan market and whether you are sipping on Cava like me or just soaking in the views, you’ll enjoy being serenaded by gypsy musicians or even more so, gentle breezes that flow between the River Darro and Alhambra set high above on one side and the hills of El Albaicín on the other. This district is worthy of its own blog post, but if you need to know more, here’s a good start. One very important thing not mentioned in this article is that in 1994, El Albaicín was declared an UNESCO World Heritage site.

Typically, I find the dish to match the wine, but since I’m not the one cooking, the star of this post is the food. I am reluctant to say fusion because today, that seems to denote trendy experiments. Perhaps, the synonym “blending” would be more accurate. Southern Spanish/Mediterranean cuisine with international flare, while uniquely paying homage to Azafrán/Saffron – the world’s most prized and expensive spice. DYK that saffron was once used as currency? Read more here.

In a recent interview with Ruta del Azafran’s Head Chef, Antonio Martínez, he says: “The gastronomic panorama of Granada is difficult, but full of possibilities.” Martínez elaborates that gastrotourism is minimal in Granada and the majority of tourists are seeking Tapas and drinks. Read the full interview here.

Here’s what I ate for lunch on two separate occasions. (If my stomach and time allowed, I would have tried the whole menu!)

On this trip and in pursuit of wine education, I was determined to discover wine beyond Tempranillo and regions other than Rioja and Ribera del Duero, as well as focus on modern Spanish winemaking. As mentioned above, I was disappointed not to find much selection in Granada, but fortunately as time went on, variety found me and most times by accident.

While you may not pair sparkling wine with steak, it’s a suitable pairing for starters, seafood and lighter dishes and of course, enjoyed just by itself. Dominio de la Vega, Idilicum Cava Brut is made from 100% Macabeo (an indigenous Spanish grape called Viura in Rioja.) Dominio de la Vega is a family winery located in the Valencian region of Utiel-Requena, within the Denomination of Origin of the same name.

Background Info on the Winery: “A high plateau of destitute clay and limestone soil, with an altitude that varies from 600 to 900 meters. The climate is continental with a great Mediterranean influence: very cold winters and very dry and hot summers with scarce rainfall. The altitude and the sea’s influence give our cava and wine their features, like their freshness and great maturity.” Read more about the harvest here.

As you may know Cava is made in the traditional method just like Champagne (le méthode champenoise.) If not, it would be labeled as sparkling wine. If you are unfamiliar with this process, a Cava specific introduction can be found here. As noted in this article, the main types of grapes used in the production of Cava are the Macabeo, the Parellada and the Xarel·lo – all of which bring their own unique characteristics to the sparkling wine.

If you are more familiar with wine, you may find this article written by Jancis Robinson quite interesting: Macabeo/Viura – the Cinderella grape? After reading it, I realized how fortunate I was to drink a wine made from 100% Macabeo and hope that in order to inspire the demand for it, you try Idilicum too.

The poem, the song, the picture, is only water drawn from the well of the people, and it should be given back to them in a cup of beauty so that they may drink – and in drinking understand themselves.

Federico García Lorca was born in Granada. His works were banned during Franco’s dictatorship and he was executed by the Nationalists during the Civil War. While visiting Cuevas del Sacromonte, I was fortunate to hear an actress from Extremadura recite one of his poems .

Granada is magical. Google Maps won’t take you where you should be. The magic begins once you resign to getting lost.

Until next time, keep your glass empty and let it be filled with spontaneity. Pair it with a dish of curiosity and may it lead you to deeper understanding of both yourself and the world.