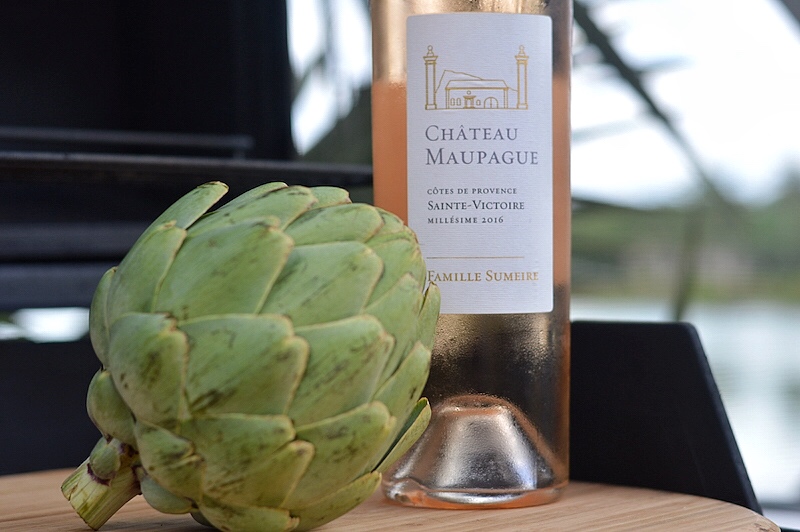 Hashtag ‘Rosé All Day’ #RoseAllDay! Yes, I’m one of those gals who can’t wait to see the shelves stocked up with slim, frosty bottles with triangular punts (that’s the technical name for the pushed up center of the bottle’s base.) There’s some serious glam marketing going into the production of this hot seller (pardon the pun) and its sexy, bottle design.

This easy to drink, chilled glass of pink also means Spring is in the air. Birds and bees do it, but did you know that vines do it too? Grapes are hermaphrodites, meaning they contain both male and female organs and can self-fertilize. However, dust in the wind, there was some serious vine fornication taking place long before it became the fermented juice in your glass. For example, Cabernet Sauvignon (indigenous to Bordeaux) is a cross between Cabernet Franc and Sauvignon Blanc. ‘Cross’ is the offspring of sexual reproduction between different subspecies within the same species. Give that some thought the next time you witness or suffer from pollen blowing around.

If you wish to read a more scientific and serious explanation of the anatomy of the grapevine, click here.

I’m “delayed” in the South of France (darn), but I’ve left the lavender fields and Châteauneuf-du-Pape behind for Côtes de Provence and more specifically Sainte Victoire, a favorite landscape of Cezanne and Picasso. The area is more sheltered from the Mistral winds than other wine producing areas of Provence and high limestone soil makes for fewer yields but high quality fruit. 80% of Sainte Victoire wine is rosé.

For wine newbies like me, you may wish to know that rosé is pink because the skins of the red grapes touch the wine for a few hours whereas in making red wine, the skins are left as part of the fermentation process for a few weeks. There are three primary methods of making rosé wine: Maceration, Saignée and Blending. Read more here.

Côtes de Provence is home to France’s oldest vineyards and oldest wine producing region. When the Greeks arrived in what is now called Marseille, they planted the first vines and the wine at that time, was a rosé. Not the pale and delicate wine that we are familiar with today, but more rustic, says Annabelle Sumeire of Famille Sumeire | Vignerons en Provence in this video. Annabelle Sumeire’s family own Chateau Maupague and other vineyards in Provence.

On a trip to Rome, I was introduced to a variety of pizza toppings (check out Bonci pizza if you do go to Rome – future #TBT blog post in the queue.) I know we’re now exposed to higher quality pizza rather than the soggy versions that arrive in a box, but American pizza doesn’t compare to the quality in Italy.

If you’ve been following my Blog, you know that I try to stick as close as possible to the origins of a particular dish. I did make the traditional prosciutto and arugula version and you can find a recipe here. However, today’s pizza is a fusion of French and Italian ingredients. I did not follow this exact recipe, but used the key ingredients that I thought would pair well with the wine: crab, artichokes, goat cheese and basil.

My fascination for dough and bread making was inspired by Nancy Silverton and I’ve been gradually reading her book, “Breads from the La Brea Bakery.” Since I’m not yet ready to make homemade yeast like Nancy does, my favorite thin crust pizza dough recipe is this one. Before adding the toppings I brushed the dough lightly with olive oil and crushed tomatoes infused with a garlic clove. I prefer to use a gas grill and pizza stone rather than my oven. With a 500 degree, consistent heat, you almost achieve the wood fired pizza taste.

Appropriately for Spring, I’ll end today’s post with a carnal spin on a vegetable story:

The wife of King Henry II of France, Catherine de Medici introduced a wide variety of Italian foods to French cooking including ice cream, sweetbreads, truffles, artichokes, broccoli, and spinach. Catherine, who was known throughout France as La Florentine loved spinach so much that any French dish which incorporated spinach was called ‘a la Florentine.’

Catherine scandalized French society with her addiction to artichokes which had the reputation of being an aphrodisiac. She also encouraged her entourage to eat artichokes, particularly the L’ escadron volant (the flying squadron), a bevy of beautiful girls who were coached as “spies of the couch,” bedding down with the influential nobles. The L’escadron volant traveled everywhere with Catherine, a sort of whorehouse on wheels. By the end Catherine’s reign, artichokes had become one of the most popular French vegetable.

So today, let’s raise a glass to Catherine! If it wasn’t for her, we’d still be in Victorian era fashion, boiling green beans!

“One cannot think well, love well, sleep well, if one has not dined well.” – Virginia Woolf

Until next time, throw caution to the wind and embrace your cravings!