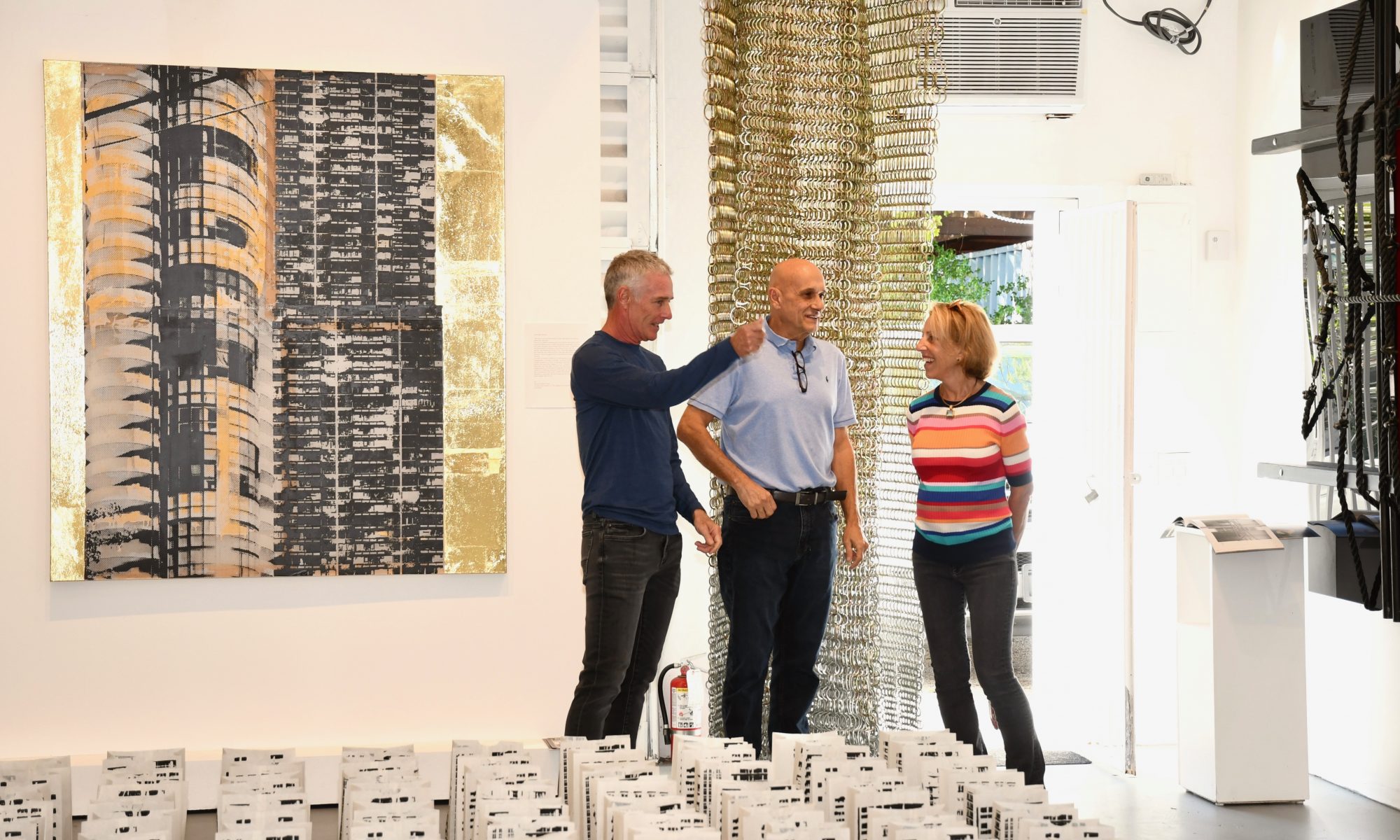 Photos and Highlights of the “Ciudades” Opening Reception

Artists in attendance were Juan Raul Hoyos (Miami/Colombia) and Jorge Olarte (Miami) and throughout the week will be present along with Andriy Halashyn (Kiev) and 2501 (Milan.)

The exhibit is curated by Etra Fine Art owner, Alicia Restrepo. She has had a long career as gallerist originally in New York City and then moved to Miami shortly after Art Basel arrived in the Magic City. Restrepo has gracefully weathered the real estate changes over the years and changed location to adapt accordingly: from the Design District (before it was a luxury retail destination); Wynwood; and now Little Haiti/Little River Art District.

Alicia Restrepo, Curator and owner of Etra Fine Art, uses the cities as symbols, differently represented by world known artists, to stimulate a dialog over the most pressing issues of today. In fact, cities are a descriptor of today’s sacrifice of natural resources, centers of communication, synthetic containers of our history, a confluence of religions, languages and ideologies; technology and alienation coming from it; social iconography, migration, selfishness and egoism.

Different expressions about the subject will create an interesting dialog between artists from diverse representative cities of the world such as New York, Milan, Kiev, Bogota, Miami, Buenos Aires and Rio de Janeiro, among others.

Ciudades will include works by:

The haunting and powerful, La Ciudades by Astor Piazzolla (Argentina) (that will be played as part of Ciudades,) not only highlights the literal connection to the exhibition’s theme, but will serve as a celebration of Piazzolla’s career who faced intense criticism for breaking tradition to create a nuevo tango (new tango.)

2501 (Jacopo Ceccarelli) began his career as a street artist when only 14 years old. He would continue to develop a new style which combines wall painting, painting on canvas, sculpture, installation, photography, video, and documentary. With respect to his work in relation to Ciudades, he states: “Nature has been ingested and hidden in the cracks of the city, in the abandoned factories, in the discarded buildings, in the shantytowns, in the landfills, along railroad tracks. It survives solely in the spaces of the collapse of policies and memory.”

Juan Raul Hoyos’ installation, Compound is currently on view at Narrativas y Procesos Del Arte Contemporáneo De Medellín/Colombia presented by Fundación Rozas-Botrán. In addressing the theme of Ciudades (cities) Oscar Roldan Alzate, Curator and Director of The Museum University of Antioquia -Colombia writes of Hoyos’ work: “To build, to install, to destruct, to dismantle, to arrange, to reassemble, to reorder, to project, to build, to reform, to modify, to deform, to form, to demolish: these are the collective actions that recall the image of ‘CITY.’ Beyond its execution we have seen the birth, the upbringing, and the disappearance of civilizations, empires and towns.”

Ana Maria Gutierrez takes pieces of posters found on the walls of her city, Bogota, Colombia and reinterprets them to form a new narrative. She says, “Each piece is composed of fragments of our urbanity, which come together in a masterful wall. A wall that invite us to get out of the obvious and to think of the capacity that we, as human beings, have to transform our environment and leave a mark in history.”

Now located in Little Haiti (Little River Art District) and previously rooted in the renowned Miami Design District for nearly 10 years and Wynwood for two years, Etra Fine Art focuses on representing and promoting a wide variety of mid-career and established international artists whose work represents modern and contemporary styles. The gallery exhibits paintings, drawings, prints, sculptures, photography and installations that reflect progressive concepts while incorporating traditional and non- traditional materials. Because of its location at the crossroads of the Americas and Europe, Etra Fine Art has made it a priority to connect artists and collectors from both regions.

In addition to promoting and exhibiting artists, Etra Fine Art works with private collectors, corporations and interior designers to build collections by researching, locating, acquiring and installing an array of artwork.

Alicia Restrepo graduated in Economics first and Art later, and has been in the art business since 1983. She was recognized as co-owner of one of the most important galleries in Soho in the eighties and nineties, before moving her business to Miami in the early 2000’s.