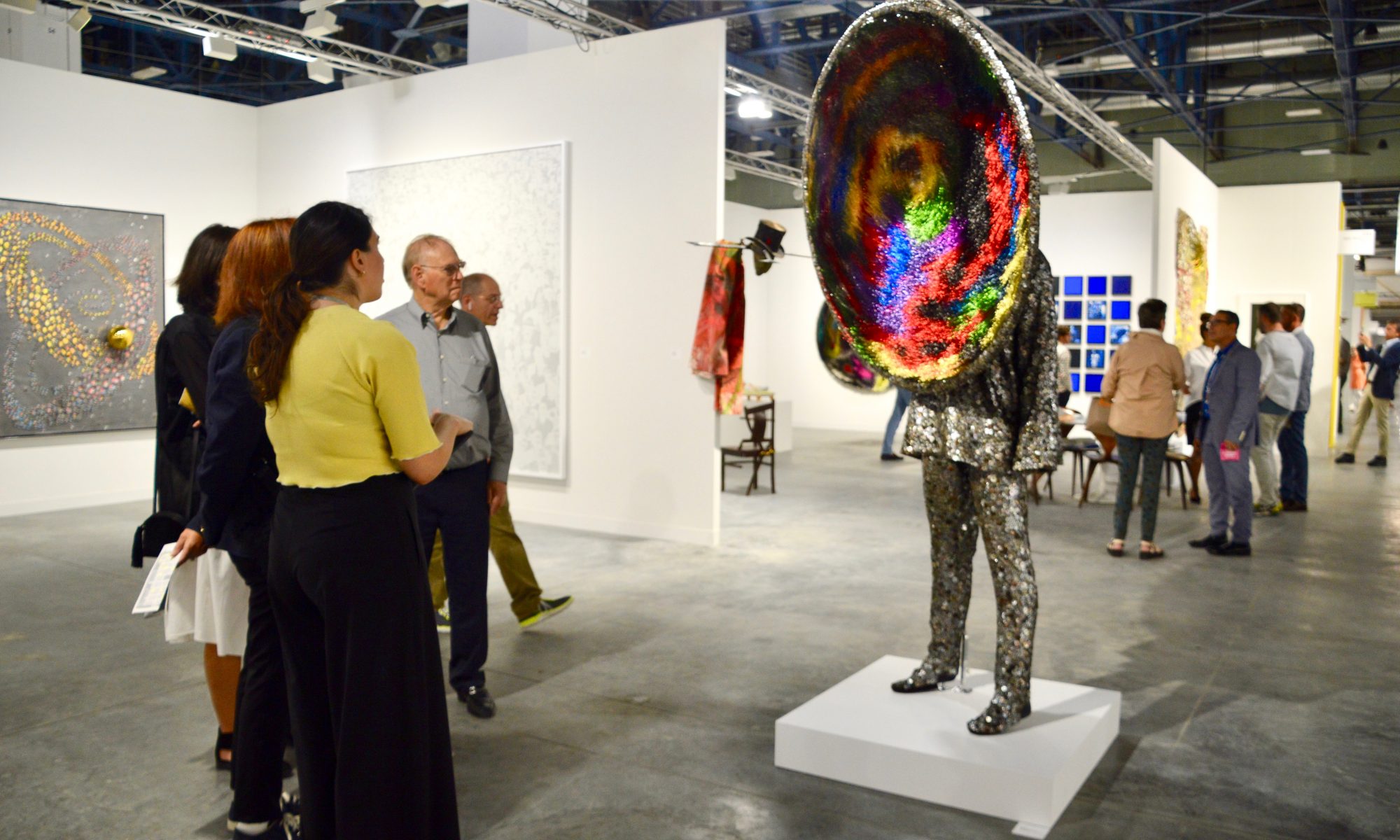 Top Art Fairs: The A-Z of Where #MyArtEscape Will Be.

It’s my favorite time of the year! I have all of my press credentials in place, am reading voraciously about art, art installations, events and VIP soirees. The trickle of incoming press releases has become a flood, and I’ll soon be swimming through miles of art. Hooray, Art Basel aka Miami Art Week is (almost) here!

Without delay, below is the A-Z of where I’ll be. Read all the way to the end because I’ll recall a couple of the past VIP events that I’ve had the good fortune to attend. You may also wish to follow my daily, Art Basel Instagram stories for highlights of each fair and a couple of special events.

Note: I’ve scaled down my art fair trekking from last year’s 10 fairs. As much as I’d like to see it all, I was art oversaturated and no shoes or running prep could condition me for that much walking.

I really don’t understand people who say that they won’t go to Art Basel like it’s some kind of art fair boycott against the 1%. Sorry, but Art Basel is the OG of international art fairs. Maybe you can’t afford to buy anything, but why would you pass on an opportunity to see a new work by huge artists like Anish Kapoor, Yayoi Kusama or my favorite American artist, Nick Cave?

Sister to Art Miami, here’s the perfect example of supporting local and emerging artists. I love this fair and most of the art is affordable for people like you and me. They offer some great programming too and I’ve enjoyed in the past, sitting down and listening to one of their talks. Looks like this year guests can enjoy visual performance art.

If I’m not staring at new works by Porky Hefer at Southern Guild, you’ll find me swooning over very expensive ceramics or an Armani Casa living room. A girl can dream right? Since I love sculpture, functional art (and I know artists and designers hate that term) makes so much sense. I want to fill my house with objects that I can touch and maybe use now and then.

I really love NADA (New Art Dealers Alliance) too. Maybe’s it’s the Ice Palace’s interior black walls and curated gallery spaces that make me feel like I’m walking through Soho on an autumn day. These curated spaces appeal to the intellect, but don’t feel shy to ask questions. There are millions of artists and you can’t know them all.

Last year was my first year at PULSE. I must admit, it’s a little out of the way and parking is not easy. Yes, you can do valet at the Eden Roc if you’re okay with the fee. However, don’t let that stop you. You have options: shuttles run between the main fairs and you can park further south and take a rideshare. The galleries are worth any little inconvenience.

Here’s a great fair for young collectors and who can resist the location right on the South Beach sand? You’ll find works that are bold and gutsy, rich in statements about society and the many complications that we face today.

If I had to choose a favorite art fair, UNTITLED, ART would be it. I really enjoy visiting galleries that focus on curation. The Untitled team is made up of curators, designers and architects providing not only an overall cohesiveness in the quality of galleries it selects, but in the fair design itself. It’s a pleasant and stimulating place to be. The natural light flows in through the skylights. I just love how each gallery is set back differently and the concept is open – not boxy like other fairs.

Here’s a look back at some of the events I’ve attended in past years.

Put on your comfy and stylish shoes and I’ll see you there! 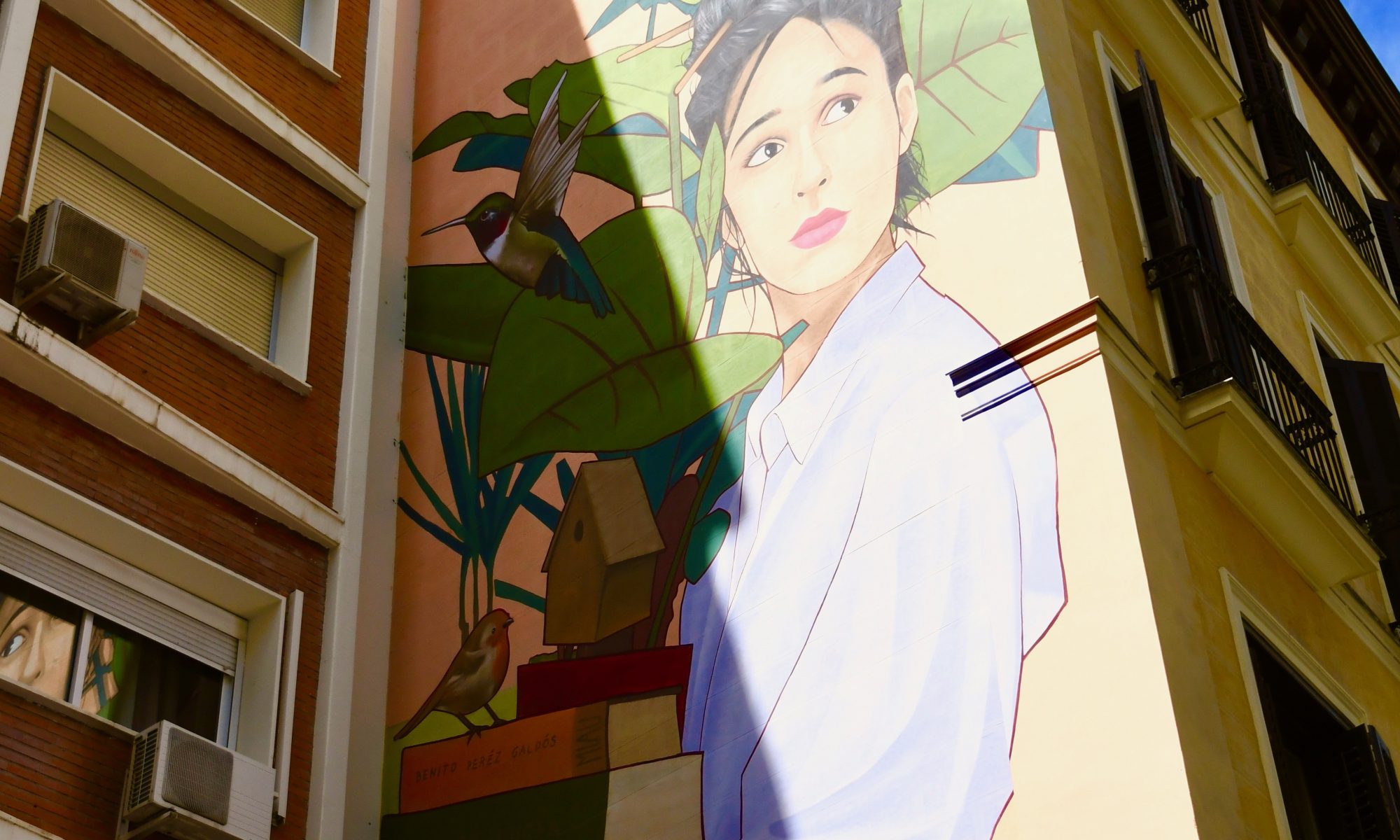 About This Town by Artez | Calle de Fuencarral 31, Madrid

A brief visit to Puerta del Sol in Madrid was Instagram worthy, but crowded with shoppers. The stores were mostly American and there were the familiar fast food restaurants. I was disappointed.

However, my eye caught sight of this colorful mural. “About This Town” depicts a girl holding a pile of books with a bird and its birdhouse balanced on top. There’s a plant behind her or maybe she’s holding that too.  The eye happily travels up and away from the crowded street to appreciate the blue sky above.

Born in Serbia, Artez painted this mural in four days to be a part of the 2019 Urvanity Art Fair. On his website, he explains: “This mural tells us the story of Madrid, a place where visitors from all around the globe are welcome to come and enjoy the vivid artistic and cultural content that this city has to offer. Positioned in the very centre of the town, this mural creates a contrast with the pedestrian shopping street in which it is located. Instead of carrying shopping bags, girl depicted on the mural is holding a pile of books important for the history and culture of the city, and a plant with a small birdhouse that is inviting all the “birds” to come and feel like home!”

A closer look reveals the title of one book Miau by Benito Pérez Galdós (considered to be one of Spain’s most famous writers since Cervantes) and another references the painter Francisco Goya. Possibly this reference is a commentary about the maladies of society.

I would say that a deeper reading surfaces from Artez’ mural. Possibly, the tourist should spend more time getting to know Madrid’s history and culture.  Or, maybe it’s the Spaniards who should pay more attention to Madrid which may be selling its soul to the tourist industry. Who knows?

In any case, she’s my soul sister. I’ll give up shopping bags for a pile of books any day. And, if my nose isn’t in a book, I’ll be birdwatching with my zoom lens pointed to the sky.

The man of reflection discovers Truth;  but the one who enjoys it and makes use of its heavenly gifts is the man of action.” 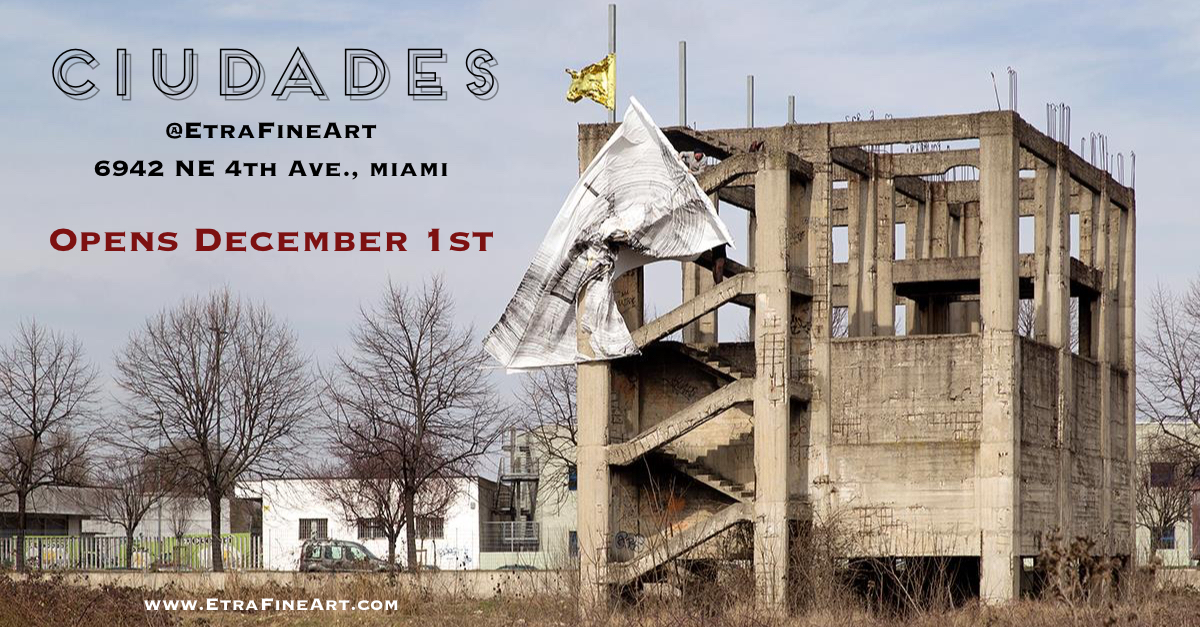 Alicia Restrepo, Curator and owner of Etra Fine Art, uses the cities as symbols, differently represented by world known artists, to stimulate a dialog over the most pressing issues of today. In fact, cities are a descriptor of today’s sacrifice of natural resources, centers of communication, synthetic containers of our history, a confluence of religions, languages and ideologies; technology and alienation coming from it; social iconography, migration, selfishness and egoism.

Different expressions about the subject will create an interesting dialog between artists from diverse representative cities of the world such as New York, Milan, Kiev, Bogota, Miami, Buenos Aires and Rio de Janeiro, among others.

Ciudades will include works by:

The haunting and powerful, La Ciudades by Astor Piazzolla (Argentina) (that will be played as part of Ciudades,) not only highlights the literal connection to the exhibition’s theme, but will serve as a celebration of Piazzolla’s career who faced intense criticism for breaking tradition to create a nuevo tango (new tango.)

2501 (Jacopo Ceccarelli) began his career as a street artist when only 14 years old. He would continue to develop a new style which combines wall painting, painting on canvas, sculpture, installation, photography, video, and documentary. With respect to his work in relation to Ciudades, he states: “Nature has been ingested and hidden in the cracks of the city, in the abandoned factories, in the discarded buildings, in the shantytowns, in the landfills, along railroad tracks. It survives solely in the spaces of the collapse of policies and memory.”

Juan Raul Hoyos’ installation, Compound is currently on view at Narrativas y Procesos Del Arte Contemporáneo De Medellín/Colombia presented by Fundación Rozas-Botrán. In addressing the theme of Ciudades (cities) Oscar Roldan Alzate, Curator and Director of The Museum University of Antioquia -Colombia writes of Hoyos’ work: “To build, to install, to destruct, to dismantle, to arrange, to reassemble, to reorder, to project, to build, to reform, to modify, to deform, to form, to demolish: these are the collective actions that recall the image of ‘CITY.’ Beyond its execution we have seen the birth, the upbringing, and the disappearance of civilizations, empires and towns.”

Ana Maria Gutierrez takes pieces of posters found on the walls of her city, Bogota, Colombia and reinterprets them to form a new narrative. She says, “Each piece is composed of fragments of our urbanity, which come together in a masterful wall. A wall that invite us to get out of the obvious and to think of the capacity that we, as human beings, have to transform our environment and leave a mark in history.”

Now located in Little Haiti (Little River Art District) and previously rooted in the renowned Miami Design District for nearly 10 years and Wynwood for two years, Etra Fine Art focuses on representing and promoting a wide variety of mid-career and established international artists whose work represents modern and contemporary styles. The gallery exhibits paintings, drawings, prints, sculptures, photography and installations that reflect progressive concepts while incorporating traditional and non- traditional materials. Because of its location at the crossroads of the Americas and Europe, Etra Fine Art has made it a priority to connect artists and collectors from both regions.

In addition to promoting and exhibiting artists, Etra Fine Art works with private collectors, corporations and interior designers to build collections by researching, locating, acquiring and installing an array of artwork.

Alicia Restrepo graduated in Economics first and Art later, and has been in the art business since 1983. She was recognized as co-owner of one of the most important galleries in Soho in the eighties and nineties, before moving her business to Miami in the early 2000’s.